Dear Blog,
I know it has been a while since I have last written but the truth of it is that not much has happened in the life of 'Niel the Wheel'. I'm not saying that I am dissatisfied with my lot.  It has been winter and too cold in the morning to get up early and too dark in the evening to get out on the bike.  What is that you say? What about that time in between these times? That time between 10am and 5pm. Well , I'm pleased to say that I have cycled consistently throughout the winter in this period, usually going out for two or three 100km rides each week. The other days  spent not on the bike have been spent on the couch. I could give you plenty of excuses as to why I have not painted weatherboards, insulated walls and re piled but the bottom line is that I do maintenance on a 'must be done or it will fall down' basis.


I am prompted to write now though because I need the world to know that I may not be powering ahead at the moment but I feel that spring is nigh upon us here and that soon I'll be getting out on adventure rides again. Over the winter due principally to a total lack of dollars , Adi and I have stayed at home , preferring to save any spare money for a decent trip next July/August. I have occupied my time by working in the bike shop over the weekends and doing mundane chores about the house during the week. The sort of chores that get you nowhere. Chores like mopping , hoovering and cleaning the bathroom. Treading water type of things. Certainly not useful chores like insulating the under floor cavities. Just the other day I found myself scrubbing out the inside of the refrigerator, nuking the oven with alkaline sprays and sterilising the rubbish bins. For weeks now I'd been thinking that my Adi had been dropping farts in the kitchen while preparing dinner while all along it was the refrigerator smelling!
In my last blog I stated that we would participate in the TransAmerican bike race. We have changed our minds. Adi thought that we were losing our focus of cycling around the world in favour of doing events in countries that we had cycled before. I cant argue with that. When we cycled across the US in 2010 I thought it unlikely that we would ever go back and here I was  last year cycling in the US again and then planning an event there again for next year. So we have come to a compromise , for 2015 we will do the Paris-Brest - Paris (subject to qualifying) but only after we have cycled there from Tiblisi in Georgia. That way we do another section of touring and I get to do a randonneuring event at the end.


We both have every intention of qualifying for PBP but time will tell if we have what it takes. Last week Adi set herself the target of cycling 500kms in the week. I knew that I was good enough for a 300km week as I usually achieve this with a couple 100km day rides and a 100kms of urban riding so told her that I would tag along. The weather wasn't the best but we did manage to both pull it off. I have to say though that my day off the bike sweeping the chimney, and doing the other forever mundane chores felt like a good break off the Mercian. 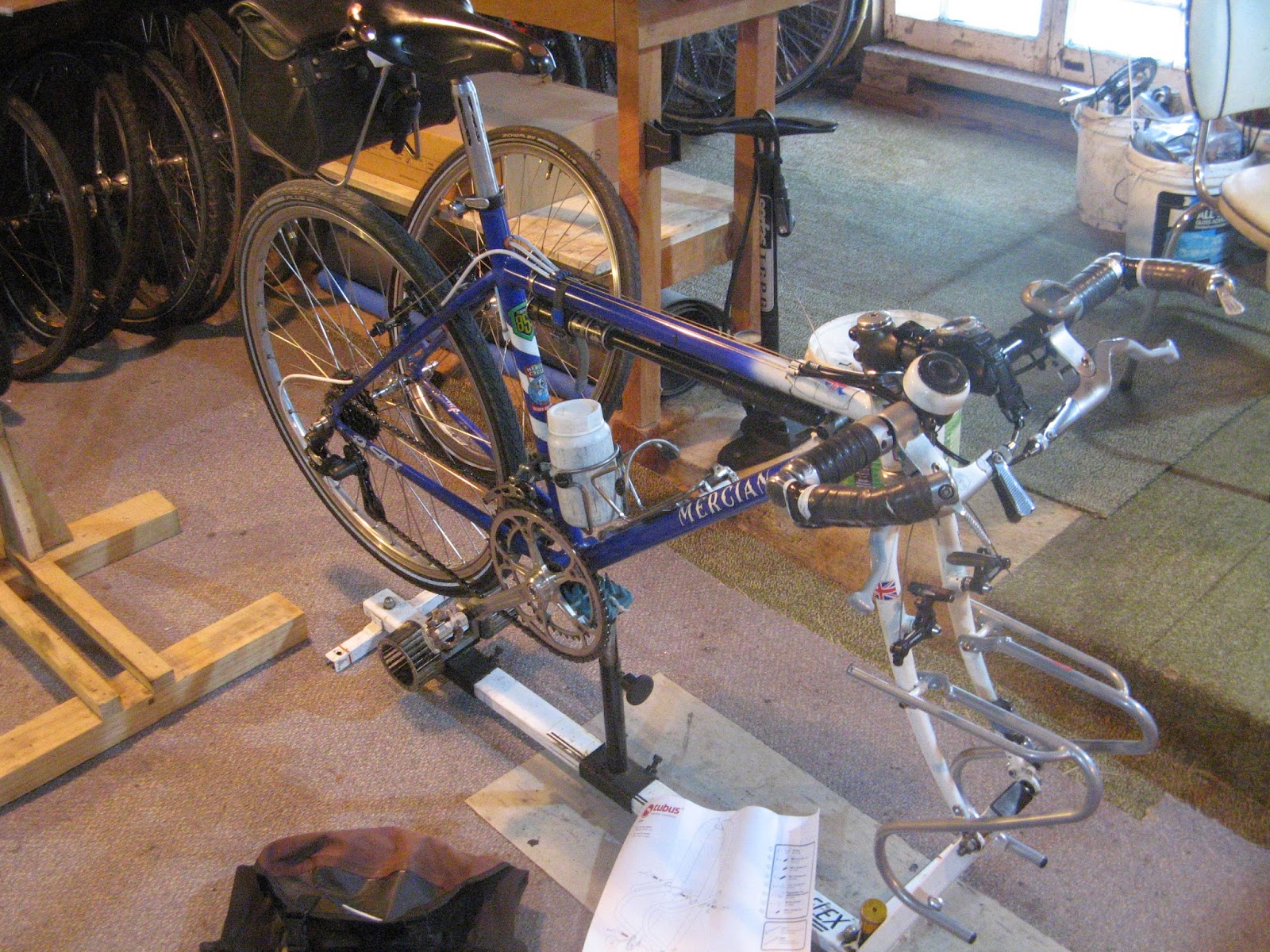 The week prior to this my new low rider rack arrived from Tubus and I spent a day in the workshop fitting it. This rack replaces my last one which broke on me in Nova Scotia last year. It was a crappy aluminium one made by Blackburn. The new one is stainless steel so I'm hoping to get more than the customary 10 000kms that alloy racks give me. Once I was happy with the way it fitted on the Mercian I then took it off ready for future adventures. My rear rack also broke on me last year coming out of the Canadian Rockies but unfortunately the bike shop up there was a bit limited on quality rear racks so I had to buy another crappy aluminium rack. This rack got me across Canada and may get me  from Tiblisi to Paris but I will get a Tubus stainless steel rear rack when I can next afford it. 'Niel the Wheel' entered the computer age in 2011 when he purchased his first laptop and started this blog. He quickly realised (since his mind is like a sponge) that the laptop was too big to easily fit on his bicycle and that he would shortly be going  cycling across South America and would need something more convenient to tap out script on and check on what his Adi was up to back in NZ. So after much discussion on the merits of an I Pad I bought myself an HP notebook. I couldn't afford an I Pad and in those days I didn't realise how bad those Israelis were, so there you go. So please don't blame me for helping to fund a terrorist state. The notebook continues to serve me well however and until recently I was happy to carry it in a pannier during overseas tours. But earlier this year I completed my first Brevet type event where travelling with minimal gear is the key to doing the big kilometres each day. I'd still like to communicate with the world however and increasingly you need to use the Internet to sort accommodation each day. To this end Adi and I decided that we needed to move to smart phones for our next overseas trip. It was then quickly agreed that because I was a lay about with nothing to do but cycle each day, and because Adi actually brings in more income and does occasional extra shifts , that she would get an i phone on her birthday next month, and I would have to wait until next year. Once again her logic was sound and I convinced myself that I didn't need anything more than my notebook anyway.


That was until my bosses at AvantiPlus Bike Shop decided to give all their staff I phones! My Dad always used to tell me that 'everything comes to those that wait Niel'  and by joves he was right. So thanks to Jo and Mike I have moved into the smart phone generation and cant believe how fast I can now access my blog and face book. Not to mention all those cycling aps that are no doubt out there waiting for me to discover. I don't have that many face book friends (due to my hate of all car drivers, truck drivers, children and pit bulls) but that number is bound to reduce even further when I figure out how to work these aps and post numerous rides on line complete with pictures of the Mercian and I. So there is no excuse now. You should be hearing a lot more from me.