Solo Around the World for 'the Wheel'

Not knowing whether I am going to London to join the remainder of the Global Bike Race entrants or go off and do my own Around the World attempt has begun to make me feel a bit stressed. Time is now running out with things like vaccinations, visas and tickets needing to be organised. But more importantly   , I need to focus on whether I am headed for South America in February or Europe. The whole indecision is doing my head in!
So I have made the decision to go it alone on a solo around the world adventure. The decision was partly made easier for me by the fracturing of the other entrants and the fact that some of them aren’t even going to start together now in London but leave from other locations. I honestly feel that it’s stupid for me to pay the extra money to get there when I too can start from my home ( Nelson, New Zealand) and circle the world from here. 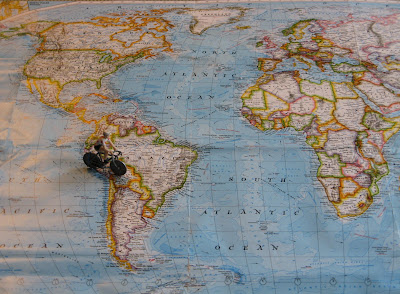 So now the decision has been made I can get on with planning again.
It was organised that I go on a long day ride today but I didn’t have the motivation for it. But feel better now that I have finally made up my mind. I’ve got a 14 day block of long distance touring scheduled in January so am not too concerned about losing a bit of fitness. 14days of 200km per day on the loaded touring bike will put me in the best form. Adi will follow me on her Vespa and we will camp around the South Island.  Then it will be a few weeks back home to fix up some last minute house things and then kiss my girl and…. Off to South America! Scary!
I hope they’ve got McDonalds over there so that I can send blogs free. My intention is to blog a few times a week. You get to send blogs for free but you have to put up with the other crap. And I don’t mean the food. What crap you ask?
The stuff that goes like this;
You’ve spent some time outside looking at the specials and have decided on something. “I’ll have the McChicken lunch combo special thanks”
“Sorry only available until 1pm” said Mr McD
“What time is it now?”I said.
“Ten past 1”said Mr McD
O shit so you frantically sort out a whole new thing in your head.
“But I can still do it”….” But it won’t be a special “said Mr McD
“How much more expensive will it be? “I said
“50c” says McD
“O for goodness sake just give it to me!!! “
Then you get the would you like x or y with that, black or white, sugar or sweetener richer or poorer. … By this time your bikes been stolen and you’ve forgotten that you only came in to use their Wi-Fi.
What I really struggle with regarding McDonalds is in countries like France where the posted wall menus are all in English but  you say McCheese or McMuffin and they don’t know what you’re talking about???
Next week I’m going to find out whether my white spirits cooker will run on petrol or whether it will explode engulfing me and Potters-End in a fiery inferno. Comments concerning this would be appreciated before I light the match on Wednesday.
Posted by Niel at 00:48