The M.U.M is Dead , Long Live the M.U.M
My previous blog was all about playing at the beach and getting through Christmas with the minimum amount of distress. I achieved an A+ in both of those topics but unfortunately February has not been as forgiving. 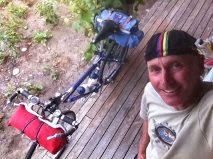 My first failure was in the 600km event that I entered as my final qualifier for the Paris -Brest -Paris. Having done a post mortum on why I managed to complete only 120 kms of the 600km event , I can with assurance put it down to over confidence , or as we say in this part of the world "being too bloody cocky".  Through being "too bloody cocky" I had decided to cycle the 1oo kms to the event the day before and sleep the night in a tent. Not a good idea as I got no sleep due to the hard ground and the fat guy in the neighbouring caravan snoring his head off! The next mistake was packing my tent up on the morning of the event and instead of leaving it at the campground I put it on the front rack and entered the event with it, intent on using it at the half way point. The next mistake, taking a front rack at all ....what was I thinking! And all the other stuff packed in the rear bag, such as ; a sleeping bag, sleeping roll and silk liner. A tooth brush and credit card were useful items but I should have stopped there. To be honest though at the end of the day my head just wasn't in it. My bike was fine (but more on that later) and physically ( in spite of the lack of sleep) I was ok.
We started in warm tropical like rain and by the time I got to the 120km mark ,( which just happened to be the closest point to home), the weather was hot and sunny, and I was telling the organiser Craig that I just couldn't be faffed and was going home. The reality of the situation, and something that I hadn't fully comprehending at that time, was that I was overloaded and wouldn't have made the distance even if I had plugged on. If gravity hadn't got me then the lack of sleep would have.
So now I have still to do the 600km qualifier. The next and only local one is out of the question,  its the busy time at the bike shop and I cant get the time off. Also the event is part of a series and I cant spend the time or money doing all of them. My last chance to qualify will be a 600km circuit in the North Island in late April. This will be on unfamiliar ground, through what looks like tough country, and in Autumn. I'm going to go for this but I'm going to lighten the load, put my best wheels on, and use the credit card for a few luxuries such as a bed the night before and at the halfway point. The organiser doesn't know it yet but I'm going to attempt to stick with him as he knocks these rides out regularly, and i think pretty much without failure. 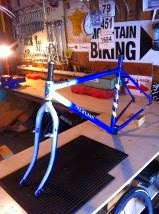 And now to my Mercian..... what can I say, last week my world was thrown into complete caos. While cleaning my bike,( the bike that has served me faithfully for 7 years standing watch over me as I slept in  rat infested hovels in Bolivia , llama huts in Peru, and the bike that got me out of the cayman infested Pantanal)  I discovered had cracked. The bike that had carried me across Australia, Canada, Vietnam and the US was fatally fractured.   I could send him back to Mercian Cycles to be repaired and repainted but the cost of the freight would be prohibitive and who's to say that when he got home he wouldn't shortly develop problems in another tube. I thought about it for the day and then  decided to strip him down , clean him up and hang him in the bike shed. A constant reminder to the fun and loneliness we shared together. He can hang next to three other frames that I have also ridden to death. Id be telling a lie if I said there weren't  tears as I removed all attached components, but there you go, nothing lasts forever.This was something I said to the Mercian people seven years ago when I commissioned him. At that time they gave me a questioning look when I also commissioned a spare ( M,U.M 2, or to possibly be called 'Step Mum') Now that spare has been pressed into service.

So my 7year old spare frame has been built up and i hope will continue to carry me around the globe, starting in Scandinavia this year. Later in the year I will contact Mercian Cycles and check that they still have my M.U.M blueprint. I will tell them that their frames are only good for about 150,000kms when 'Niel the Wheel' rides them and that they'll have to start building me another spare. I'll tell them I am mildly unamused and I have calculated that at the rate that their frames break down I will need to put aside about $1 per day to be able to travel in the class to which I have become accustomed.
I'm going to have to end now as I'm too sad. I'll finish by saying though that M.U.M 2 or my new' Step Mum' has built up into a fine thing and I am happy for her. In time we'll bond , but I'm still sad and having trouble growing attached to something so transient. I'm not even sure I'll clear coat her paint work. Whats the point , she's just going to die and leave me in 7 years.
A CHICKEN CAN PROBABLY LIVE THAT LONG! 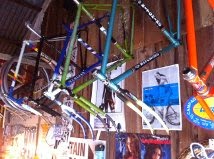 ps. I bare no disrespect for the craftsmanship of the Mercian builders as they do a lovely job. Its the raw materials that are at fault. Reynolds Tubing may have built structural components for Spitfire fighters back in the day,  but then what was their life expectancy? Serious cyclists need something tougher than steel.
Posted by Niel at 00:05